View the hottest San Diego, CA homes for sale and real estate below! With an estimated population of 3.3 million people, this sparkling city on the Pacific is famous for pristine beaches and water activities, great weather, and many exciting neighborhoods. To request up-to-date information, including sales history and prices, property disclosures, and more about San Diego properties for sale, or to arrange a private showing of any property listed below, contact your LOCAL real estate experts today. Read more about San Diego real estate.

This page is updated with San Diego home listings several times per day directly from the San Diego, California MLS.

Each San Diego MLS listing includes: the property price, days on the market, square footage, year built, lot size, number of bedrooms and bathrooms, assigned schools, construction type, and other important details as entered by the listing agent in the MLS.

Since San Diego is such a large city, there's almost certainly a style of home here to match anyone's needs. San Diego waterfront homes provide unbeatable access to the Pacific Ocean, while the downtown San Diego condos are surrounded by world-class restaurants and city parks. In some neighborhoods a bit further from the city's center, residents can enjoy the best lakes near San Diego. Scripps Ranch, one of the area's best master-planned communities, has access to Miramar Reservoir.

Home prices typically range from $350,000 to upwards of $2.5 million or more for luxury mansions, although San Diego's most luxurious homes can be priced as high as $20 million. There are still plenty of options for people looking for more affordable neighborhoods. People looking to live within walking distance of the beach might love the La Jolla neighborhood. Inland areas, including the city of Escondido, are popular for their stylish single-family homes.

Within San Diego's many neighborhoods, the city also offers several subdivision communities. A few options include Del Sur Living, Avella at Civita, Lennar at The Pavilion at Pacific Ridge, Davidson Communities, Sendero Collection by Tri Pointe Homes, and Lennar at Bayside Cove. Some of San Diego's neighborhoods even offer empty lots so buyers can build a custom home, built by one of the many great builders local to the city. If one can't find what they're looking for right in the city, there are a number of great San Diego suburbs to explore, some of which have great walkability.

Interested in joining the military, or have a family member who plans to? If they will be attending the Marine Corps Recruit Depot San Diego, there are plenty of great places to live in the area. Some of the neighborhoods near MCRD San Diego include Mission Hills, Roseville-Fleetwood, and Little Italy, but you can also live on base. The latter two are also excellent options for those stationed at Naval Base Point Loma. Or, if they will be at Naval Base Coronado, there are great neighborhoods to pick from near there, as well. Thinking about moving to MCAS Miramar? Some of the best neighborhoods near MCAS Miramar to live in include Sorrento Valley, Tierrasanta, and La Jolla.

San Diego's economy and employment are driven by military and defense activities, international trade, tourism, research, and manufacturing. In fact, the top five employers in San Diego are the United States Navy, the University of California, San Diego, Sharp HealthCare, the County of San Diego, and the San Diego Unified School District.

San Diego's deepwater port is home to the largest naval fleet globally, but there are also Marine bases and Coast Guard stations here. The port is also used commercially, as the U.S. government authorizes San Diego to operate as a Foreign Trade Zone.

Tourism is a large industry for San Diego, and there are many amenities, including outdoor activities, family-friendly activities, dog-friendly activities, and walking and jogging trails for both residents and its many visitors to take part in. The amazing climate in this city is one reason many people love to move to San Diego and enjoy the golf courses near the city, and the Farmers' Almanac even noted that San Diego has one of the top ten best climates in the United States. The Weather Channel also has said that the city has one of the two best summer climates in the U.S.

San Diego has a variety of schools for students, including public, private, and charter schools on top of colleges and universities. San Diego Unified School District is the second-largest school district in California, and it serves the majority of public schools in the city. There are over 200 schools altogether, including 107 elementary schools, 24 middle schools, and 28 high schools.

San Diego, California, may be the perfect place to buy a home for anyone looking to live in an area with a warm year-round climate that attracts a large population and many visitors. This large city has plenty of things to do during vacations and staycations, an interesting history full of fun and odd facts, and many wonderful homes for sale.

Looking to purchase a home in San Diego? Let our San Diego real estate experts guide you through the sale of your current residence or the purchase of your new San Diego property. As local real estate agents, we have up-to-date information on the San Diego, California real estate market's unique dynamics.

Contact Beer Home Team with eXp Realty to learn more about representation for buyers and sellers. Preparing to sell your San Diego home? View our market analysis page for a home value estimate within moments.

Back to All Featured Communities 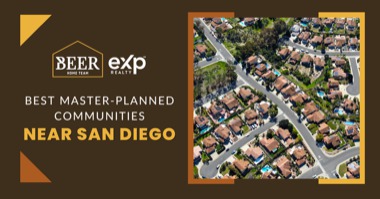 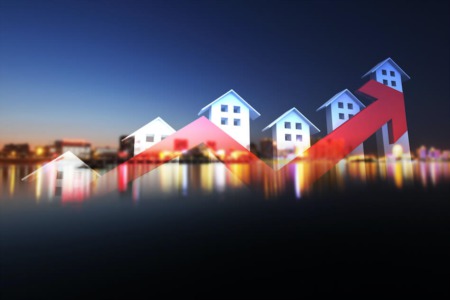 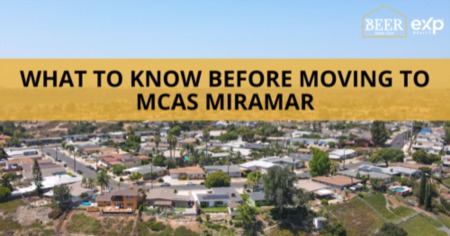 What to Know Before Moving to MCAS Miramar: Housing, Miramar BAH & Base Info 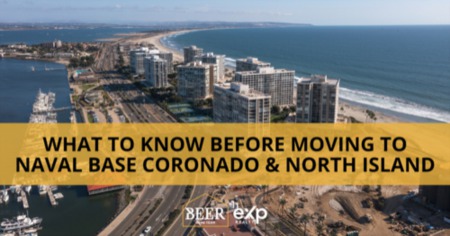 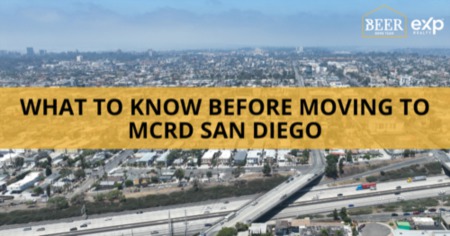 All uses except for personal, non-commercial use in accordance with the foregoing purpose are prohibited. Redistribution or copying of this information, any photographs or video tours is strictly prohibited. Displayed property listings may be held by a brokerage firm other than the broker and/or agent responsible for this display. The information and any photographs and video tours and the compilation from which they are derived is protected by copyright. Compilation ©  2022 San Diego MLS.