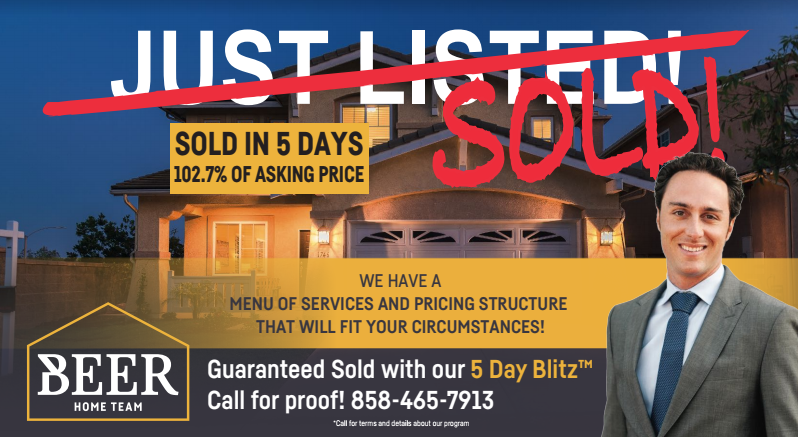 These Chula Vista homeowners were referred to our team through their cousin whose home we helped sell in September of this year. They needed the same experience their cousin received which involved a quick, successful sale plus assistance with purchasing a property in the area. Finding a new home was crucial because they wanted to put an offer on a home they loved before thinking of selling. Luckily, through the help of our sales team, they found a home sooner than expected and with that they moved forward with a number of suggested home improvements to prepare their home for the market. Just 6 days after the first day of showings, the home sold for 102.7% of the asking price! 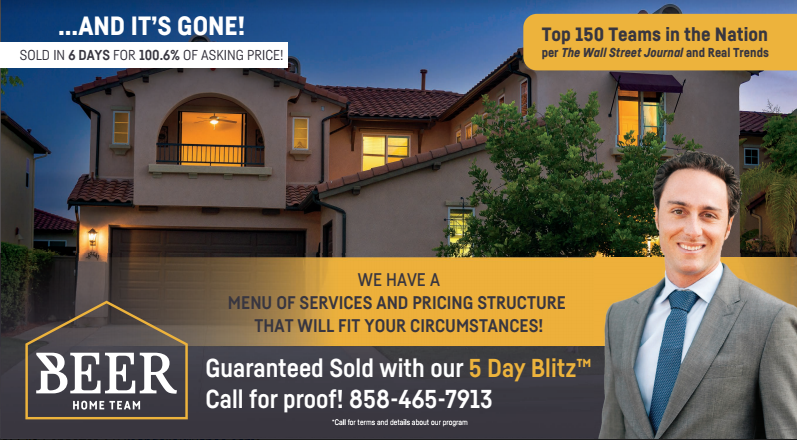 We had originally met these 4S Ranch homeowners at a San Diego Home Selling Workshop that is hosted monthly across the county. They were impressed with what they learned and so decided to implement the 5 Day Blitz™ program for the sale of their own home because they needed a proven process to get their home sold quickly and for top dollar as they were in the midst of retiring. On the flip side, they were searching for a ranch-style home in a community that did not require HOA fees. We were not only able to sell their home in 6 days... 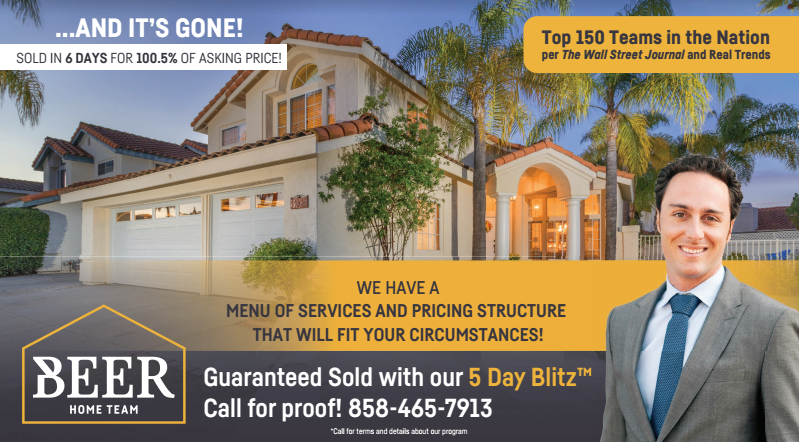 After living in their Rancho Bernardo home for over a decade, these homeowners were more than ready to act on their plans to decrease their monthly payments and move to an apartment in North County.

Being first time home sellers, they were looking for an agent who not only knew the market extremely well, but also had a successful and proven track record of selling homes. They ended up attending one of our open houses, where they connected with a team member who then set up an interview with our Head of Listing Department. After meeting and learning more about our minute-to-minute listing agreement and flexible commissions, they decided to move forward with our team. 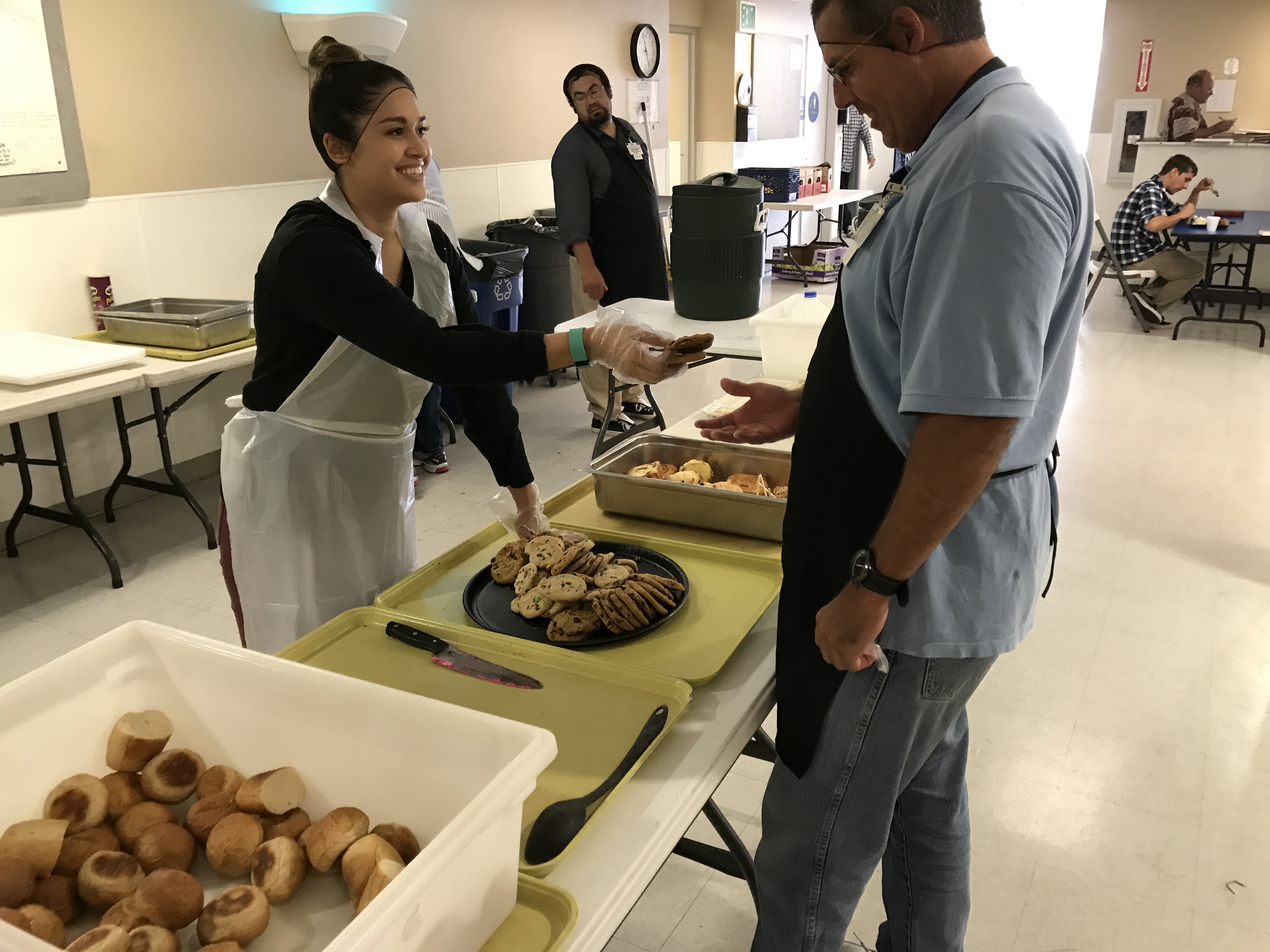 "When my company presented us with the opportunity to take a day off and spend it by giving back to our community, I was excited to plan what that day would be. I've lived in San Diego for 10 years, but I haven't actually looked into ways I could give back to a city that has made my life so rich and wonderful. I didn't know where to start, but my colleague mentioned the San Diego Rescue Mission in downtown San Diego and I reached out to them and was quickly able to schedule a time to help out.

After signing up to assist with the men's dinner, I did some research about the non-profit organization to understand what I was getting myself into. I learned that they help both men and women with housing for up to a year as well as have a nightly emergency shelter... 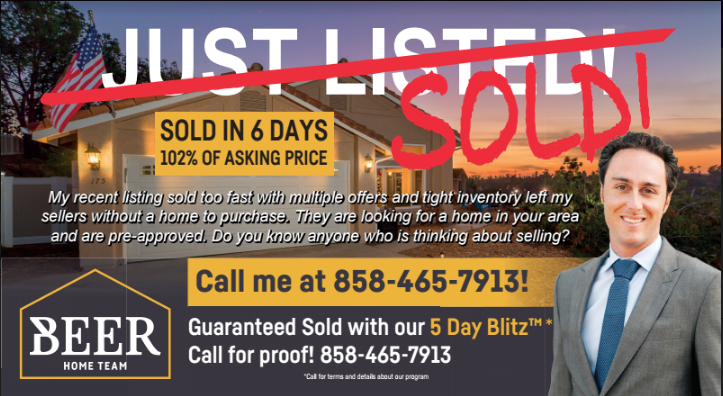 These home sellers invested a great deal of their time and money into upgrading their home and so needed an agent who could earn them top dollar. Extremely motivated to get on the market, they gave us a call interested in knowing more of our Guaranteed Sold program that promises our clients we will sell their home at 100% of their asking price within 29 days or we will pay the difference. After finalizing the renovations and landscaping, their home was ready to be put on the market. Our team implemented the 5 Day Blitz™ program, which in turn brought in dozens of buyers through the first day of showings creating a competitive environment. Just 6 days later, the home sold for 102% of the asking price! 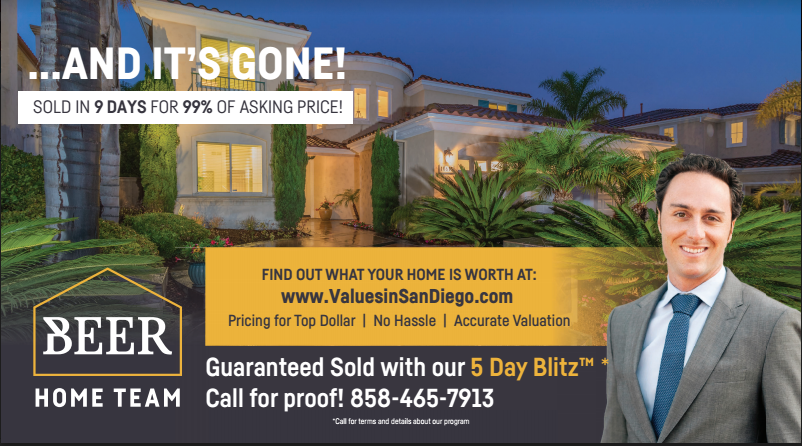 The owner of this home was referred to us from a good friend of hers who is an agent in Temecula. After interviewing several other agents first, she decided to list one of her investment homes with Beer Home Team. She was beyond ready to put this home on the market for a quick sale so it was off her plate moving forward. Our team implemented our 5 Day Blitz™ marketing program in full force bringing in over 20 groups of people to the first days of showings! Just 9 days later, the home sold for 99% of the Asking Price! Our client couldn’t have been more happy with the quick and efficient home selling process and the fact she no longer had to worry about her rental property.

Using our 5 Day Blitz™ Marketing Program, this single level Chula Vista home in a family-friendly neighborhood brought over 150 groups together on a Sunday afternoon for the Grand Opening. A few days later, the home had over 30 plus offers, selling in just 6 days at 108% of the asking price. Our 5 Day Blitz™ program allowed this home to sell extremely fast and for more than the market could bear.

Hear what one of the attendees had to say about her experience at San Diego's Home Selling Workshop in fall of 2015! These workshops were extremely successful and this is just one of the many positive testimonials we received from all of those who participated.

This year’s first round of San Diego’s FREE Home Selling Workshops presented by The Daniel Beer Group are less than a week away! Seats are limited and filling up quickly, so be sure to register TODAY here or by calling 1-888-996-0239.

We are thrilled to share how you can get your home sold within 5 days of going on the market and net upwards...

SOLD After Just 5 Days on the Market!

Sold for more than next door. Why? Powerful marketing and prospecting. 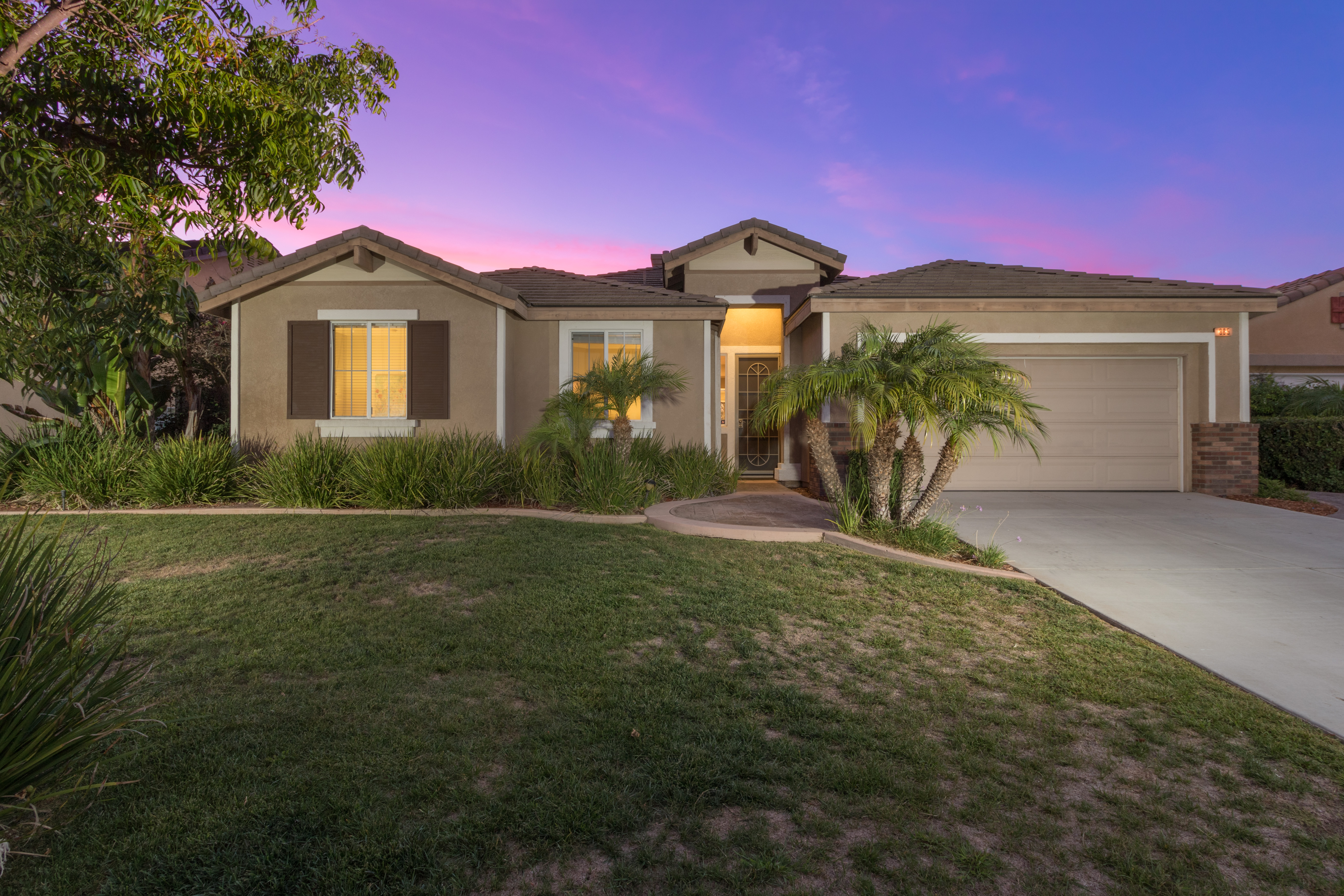 Our clients were renting while their home was on the market and as time went by, they quickly became tired of paying the bills for two properties. As soon as the Daniel Beer Group took matters into their own hands, the home selling process instantly became more ecient and moved along much faster.

Why? Because our unique 5 Day Blitz™ program allows us to sell homes fast and for top dollar using aggressive marketing and proactive prospecting. We employ a mix of old fashioned hard work and cutting edge innovation using the latest marketing tools, which is why our client's home was sold after being on the market for just 5 days....

How we helped Justin sell his home by always being available

"I got great results with the Daniel Beer Group! We were trying to sell our house for five months before we started working with them, and once we switched, the house sold in about a month. Daniel and Lynda were outstanding. They were great about being accessible and getting back to us as soon as they could.  The whole experience was great!"

LaDainian Tomlinson's House Sold in Only 16 Days For Full Price!

NFL great and future Hall of Fame running back LaDainian Tomlinson’s Poway, CA estate sold today at its full asking price of $3.495 million after being on and off the market for the past four years with different firms without selling. The property was co-listed in July, and sold in a record 16 days by the San Diego based Daniel Beer Group of Windermere Homes & Estates and The Agency in Beverly Hills.

So what exactly is the Formula for Success employed by Daniel Beer Group? It is a proven aggressive versus passive marketing strategy that involves, but is not limited to, thoughtfully investing in a custom plan to get each property sold. This proven formula is backed by top producing experience that comes with a full-service team where each aspect of the business is managed by its own dedicated department; listings, buyers agents, prospecting, in-house transaction management, operations and marketing team.

2012 in Review For The Daniel Beer Group

It has been quite an amazing year, both on a personal level and for the market.  With the help of individuals like you, we managed to have our best year ever and I could not be more thankful.  This year alone, our team has sold and marketed 39 homes totaling $30,500,997.

Together, we have managed to build a team that currently ranks 4th among the 400+ agents in our company.  This year has brought many challenges and has been a tremendous learning process, but I can proudly say it has also been a blast and I wouldn’t trade it for the world.  More si-highlight--primaryly, nothing would have been possible without the tremendous support of our clients?.

The greater real estate market is in a state of rapid change.  Nothing illustrates this more clearly than the numbers.  At the end of November 2012, we had 5008 properties for sale across the county compared to 10,052 homes a year earlier.  That is roughly 50% less inventory in just one year!

Another way of looking...

Daniel Beer, Team lead of San Diego Home Finder, is proud to announce his partnership in Long Island NYRE, a Long Island, NY real estate office.  His partners include two Long Island residents, both of whom are attorney's.  One practices law in Long Island and the other is an assistant DA for Queens.

The team is extremely excited to get working and apply all of the best practices that have produced many many happy real estate customers in the San Diego market.  Like the San Diego Home Finder team, Long Island NYRE will be structured as the premier online portal in the region and service buyers and sellers with instant response to inquiries and expertise across the Island.

The company will be headquartered out of it's Bellmore office and will be open for business seven days a week.  It is going to be a really fun journey and a long road to get the operation to the...

Congratualations to Rod Stadelmann, who successfully closed escrow on a beautiful columbia district one bedroom condo at the Sapphire Tower. He negotiated an excellent deal for his clients on a beautiful 18th floor unit with excellent water views of the bay and downtown city views as well. It is one of my personal favorite buildings downtown with it's easy walking distance to San Diego's Little Italy. Rod's clients are going to be very happy.

Rod has also been very busy with active deals in escrow around San Diego County includng Santaluz and Lakeside. He actually conducted inspections at both during this busy week and has been actively showing homes in Carmel Valley and Encinitas. Congrats Rod and keep up the good work!

Be one of the first to know when new listings matching your criteria hit the market.

Our free service provides you with a detailed estimate of your home's current market value.

Get a Free Market Analysis

Find your next home and learn about neighborhoods, current market statistics, and local schools.

In today's highly regulated market, it's more important than ever to work with a lender you can trust.